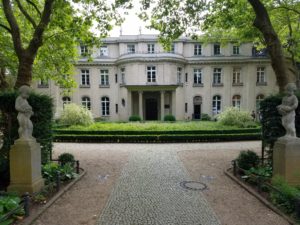 Often when we discuss the atrocities committed over the course of history, we focus on the act or mentality behind the cruelty. What we must do, however, is put emphasis on the human experience that was a reality for so many.

As our trip continued to the Villengarten Marlier-Haus Der Wannseeknferenz— a villa in a vacation community used by the SS— we learned all about the infamous meeting of high-ranking SS officials and other Nazi leaders as they came together to discuss the “final solution to the Jewish question.” It was in this picturesque setting at the Wannseeknferenz (Wannsee Conference) that the heartless and calculated decision was made to murder over 11 million Jewish people. 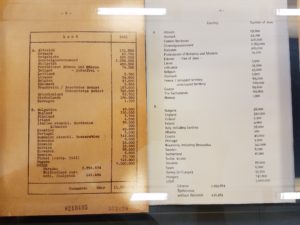 First creating a list of all the Jewish citizens throughout Europe, the conference attendees then systematically planned out how the mass executions would occur.

As the Nazis wanted everything to take place in an orderly manner, they determined which laws would need to be changed to ‘convict’ Jews of crimes to allow for their deportation and then murder. They planned for how property would be redistributed, how transportation would be utilized, where camps would be set up, etc.

With cold calculation and soulless decision, the attempted elimination of a religion and race was planned. From that date, January 20th, 1942, until the end of the war, the Nazis would kill six million Jewish men, women, and children. This would be in addition to the millions of non-Jews that they killed because of their sexual orientation, race, handicap, or other absurd reason. 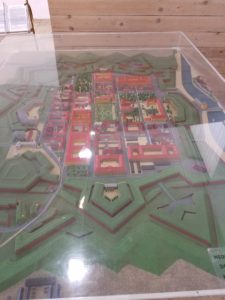 As clearly as we see the impossibility of anyone justifying such actions, we must also remain cognizant of the fact that many are still discriminated against for the very same reasons. While humanity has made it clear genocide is unacceptable, we must also strive to show that hatred, bigotry, and discrimination are also intolerable.

Next, we traveled to the old fortress city of Terezín in the Czech Republic, which the Nazis turned into the Theresienstadt concentration camp.

As an old Austrian fortress, the Nazis determined it was a location that they could utilize as a ghetto and transit hub for moving Jewish prisoners to extermination camps.

With no surprise due to its tragic past, Terezín today is still mostly uninhabited. Only those with no other options have moved back into the city center. As a largely under-populated town within a huge fortress space, it creates a very eerie feel. 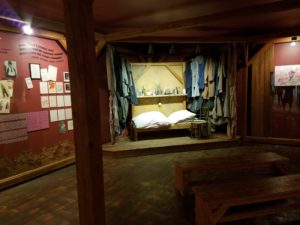 However, during 1941 the Nazis crowded Theresienstadt concentration camp with up to 75,000 prisoners at one time. In fact, as it wasn’t a camp specifically used to kill prisoners, the biggest risks to those living there were disease and starvation.

The overwhelming feature of this camp, though, was that while the prisoners were tortured and starved, the Nazis used the premises to simulate more humane settings and events to serve as propaganda they would share with the world.

During our visit, we were able to sit and watch one of the propaganda films that the Nazis produced. In it, you saw prisoners playing soccer in one of the squares, others gardening in the fields, and still others seeming to laugh and have fun… All, of course, completely fake and staged. 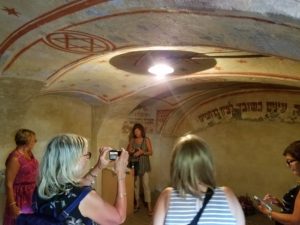 The Nazis went as far as creating a theater where prisoners could put on and watch performances that would be filmed for propaganda videos. They created rooms with better living quarters than actually existed and other amenities that prisoners were never able to use other than for the filming of these fake stories for the world.

The prisoners did, however, manage some deception of their own. They were able to create their own hidden synagogue (still easily recognizable today), write and distribute an underground newsletter to share information, and find other ways to preserve their religion and humanity. 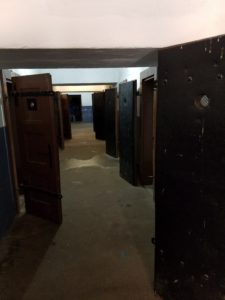 When a team from the International Red Cross came to inspect the camp, they didn’t see any of the hidden Jewish spaces, and apparently, they were completely fooled by the Nazi ruse. Their visit took place in less than three hours and based on their limited observations, the Red Cross reported to the world that the prisoners were being treated very well.

Nearby, for those imprisoned in the small highly fortified stronghold within the fortress city, life was even worse.

There, prisoners were tortured, executed, confined to small cells, and brutally mistreated.

For all those who died in the smaller fortress prison or for those who died while waiting for transport from the larger concentration camp in the city, their bodies were cremated right outside of town at a crematorium that still stands today. It is a haunting reminder of the depth of Nazi inhumanity and the need to educate everyone about genocide. 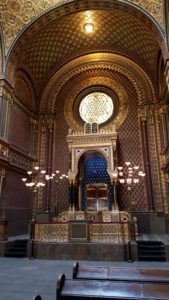 As our journey continued into the immaculate city of Prague, we were confronted with something entirely different. Several synagogues still stand, many with Jewish religious items still well preserved.  The preserved items had been discovered in Nazi storage bunkers where they had been meticulously catalogued and stored. In fact, there was a deliberate effort on the Nazis’ part not to destroy any of the Jewish sites of worship in Prague.

As student-travelers, we were able to visit numerous synagogues, a Jewish primary school (where the names of all the local victims have been hand-written onto the walls), and even an undisturbed Jewish cemetery (although overcrowded because the Jewish people were given no extra space – so over 90,000 buried over time with only 12,000 headstones). It was an incredible, albeit puzzling, opportunity to study the incredibly rich and preserved history of the Jewish people of the area in once Nazi-occupied Prague. 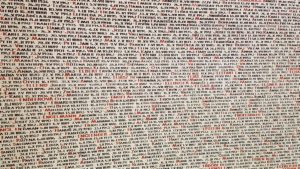 But the questions plagued us the entire time: Why were such beautiful and important sites of Prague, rich in Jewish history, left untouched during Nazi occupation?  Why were so many beautiful and ceremonial Jewish artifacts found in the Czech Republic catalogued, preserved, untouched? While not known for sure, one of the leading theories is that the Nazis wanted to keep Prague and all the items they had stored and labeled as a “museum to the extinguished race.” Here, their deranged plan was to dedicate sites in celebration and remembrance of the Nazi Party’s success in eliminating Judaism and its people. 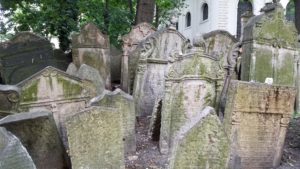 As disturbing as the whole concept of the Holocaust is, it is during these granular experiences that it even becomes even more troubling. When you can stand on a road where so many suffered, when you can touch what they touched, and when you can see what the perpetrators were planning, it becomes sickening.

It is why we must keep telling the story, why we must never forget, because we can never let the seed of bigotry sprout, or the sickness of hate be forgotten— lest it be repeated.