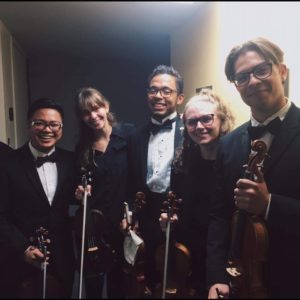 Members of The Montclair Orchestra

On October 26th, residents had the distinct pleasure of attending the first concert of the inaugural season of the Montclair Orchestra.  The concert was held at St. Luke’s Episcopal Church on South Fullerton Avenue.

The orchestra consisted of nearly eighty musicians from all walks of life.  Some play professionally for other orchestras.  Some are students from conservatories like Juilliard, The Manhattan School of Music and Montclair University’s John Cali School of Music.  There are even some members who are professionals in other career paths that are not musically related.

The Montclair Orchestra has an interesting history.  In its first incarnation, the orchestra was formed in 1922, through a collaboration with St. Luke’s Episcopal Church.  It was such a successful endeavor that they moved to Newark and went on to become The New Jersey Symphony Orchestra, which is currently one of the largest orchestras in New Jersey.

In 2016, President Andre Weker reestablished The Montclair Orchestra in order to bring a high level of orchestral music back to Montclair and the surrounding area as well as to perform a wide range of music from the baroque period through to modern day works.  Andre, Music Director David Chan and the orchestra have delivered.

During the performance of October 26th, the orchestra, led by Chan, who is also the concertmaster for the New York Metropolitan Opera, played Verdi’s La Forza del Destino, Mozart’s Symphony No. 29, and Mahler’s Symphony No. 4.

Knowing one of the tremendous performers, viola player Ivan Mendoza, I look forward to attending future performances this season.  It is a great opportunity for Montclair residents to experience something special and interact with interesting musicians like Ivan.

Ivan began playing viola when he was ten years old.  He recently received his bachelors degree from Montclair State University and has been a resident of Montclair for the past two years.  On being a part of the Montclair Orchestra, Ivan had this to say, “It was an amazing experience being able to play with my peers and members of some of the country’s best orchestras.  Being an aspiring orchestral violist, it was a thrill to see how a professional (or in this case, pre-professional) orchestra ran.  Everyone was a working cog in a larger machine…Just playing with people who knew what they were doing pushed me to do my best and contribute everything I had to produce a great performance.”

Descriptions of the performance portrayed the playing of the orchestra as truly incredible.  I look forward to future performances and I urge you to experience The Montclair Orchestra for yourself.  There are several upcoming events for this inaugural season that will be held in venues throughout Montclair.  Choose the one that speaks to you, and enjoy the performance.